On Friday, I gathered S, N, A, and P  on the carpet to talk about their club book: The Bully Book.  I wrote about this group of boys here. S and P huddled close together. N rolled from side to side on his stomach as we waited for A to come to the carpet.

They put their chosen post it’s on the “game board” they had created for book talk.  The object of the game is to choose a post-it that can be talked “long on” before moving to another. 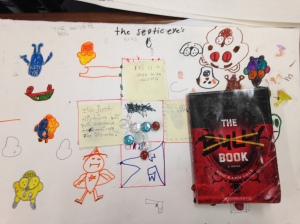 Each group member has a place for his post it.

“Eric is bullied by Donovan after summer camp, so this makes me think that the camp … ”

Three of the four boys go into a talking frenzy. No one is listening.

I call a time out. “Hey guys! You have so much to say. We need to hear all of your thoughts. So can we have a do-over?”

I show them”talking pebbles.” (Those shiny glass stones in the middle of the board above.) Captured by the potential of a new piece of the “game.” They settle, and I explain the rules. Each partner begins the with three stones. When you share a thought, you put it on the board. When you’re out, you’re done talking. Once all players have played their pieces, they start over.

S shares a pebble. “I think Donovan has turned against Eric because of the summer camp.”

P puts his pebble in, “It’s because he lost weight.”

N goes next, “Is Eric fat too? Is that why they were friends.”

The process continues. S, N, and P are quickly out of pebbles. They all look at A, who still holds three pebbles.

Literature is a struggle for A. His strength is informational text, when it’s right there. Emotional, inferential work makes him uncomfortable. He has to offer up three things. Fortunately, there is a post it on the board to start him off, allowing him entry. The other boys help him by pointing to thought prompts on the side of their board. They get him through, and everyone gets their talk pebbles back.

In the second round, S holds back, allowing a back and forth between him and A.

Issues in the book started to surface. A disagreement happened, and they talked it out. Patience was found by N, who has very little. S’s natural patience supported A through this talk.

The discussion ended, and they agreed to finish the book over the weekend.

I learned a lot about these boys and how they interact.  We had to work on being heard and listening before we could do anything else.

Monday will be interesting. Will they come prepared to their club meeting? Will they remember the rules and follow them? Will they walk away from the meeting with a bigger understanding? We will see.

My Tweets
Back to top
Going to Walden
Divergent EDU

a community for number string design

The Journey is Everything: Writing & Teaching to Discover, to Essay, to Live Wide Awake

Crawling Out of the Classroom

In everything that my students and I do together, we strive to find ways to use reading and writing to make the world outside of our classroom a better place for all of us to be

Exploring the intersection between teaching about talking and talking about teaching

Reading to the Core

thoughts on education by Grant Wiggins

Be Strong. Be Courageous. Be You.
There's a Book for That

Reflections on the Teche

Reflections and poems about life on the bayou

A Blog about Learning, Teaching, Writing, and Reading

I am a reader, a teacher, a writer, a thinker, a reviewer, and a dreamer of dreams.

A blog about learning

Of Fourth and Excellence

Learn Something New Daily, Teach What You Love

This WordPress.com site is the bee's knees

the good. the bad. the planning.

A meeting place for a world of reflective writers.

Thoughts on Teaching, Learning, and Leading

A blog about running, reading, and teaching!

A group blog about using genius hour in our classrooms

Catching Readers Before They Fall

A community of readers

Thoughts on Literacy & Leadership in Education

To Make a Prairie

A blog about reading, writing, teaching and the joys of a literate life

"When you know better, you do better" Maya Angelou