“Are you a writer?”  said the man seated next to me. He was peering at my notebook.

I felt shame. Shame for being caught.

Yesterday as read comments on Jo Knowles’ blog, that ghost of shame revisited me. Writers participating in Kate Messner’s Teachers Write Summer Camp were offering their work, their story ideas, their writing that was in progress. I read and thought, Write like this? Oh nooo, not me.

No, I’m a teacher. I teach writing, so I’m learning about ways to teach writing. But, me, oh nooo. I don’t write.

That’s how I described myself to the man who sat next to me on the flight to New York.

I was too embarrassed to say, yes I write.

I’m the one who tells students and colleagues that they NEED to write to understand who they are and what they’re thinking. Shame on me for not having the courage to say what I believe in about myself.

On Slice of Life Tuesdays and within the Slicer community, I write.  The evidence, acceptance, and the expectation is here. I’m not afraid or apologetic.

But when I venture outside of this space, into the world where everyday people go to work and do everyday things, I choke on those words.

When I construct my public persona, the one I tell my neighbor or any stranger, I might mention my occupation or my family status; I could easily continue by describing myself through my passions.  I’m a far cry from an Olympic athlete, but I can, without a moment’s hesitation say I run, or I swim. And I say this because I do it, regularly, five to six times a week.

Telling someone outside this community that I write doesn’t feel acceptable.  Perhaps because I haven’t done it long enough. Perhaps because it’s a thing that no one sees you do. Perhaps it’s a cultural thing.

Whatever the reason for my reluctance, it shows a lack of faith and belief in writing as plausible pursuit or passion. If I can’t admit that I write in the same way that I say I run, how can I convince others that writing is something one does or should do. Much like exercise, it’s good for you and at times, feels good.

When that man asked me if I was a writer, I was embarrassed and denied it. Now, I feel shame for what I didn’t say. He wasn’t making fun of me, he was just asking.

So, the next time someone asks, Are you a writer? I’ll say, Yes! And you? 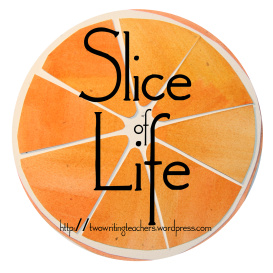 Thank you, Two Writing Teachers for the space to write and the community of support. For more slices click here.

My Tweets
Back to top
Going to Walden
Divergent EDU

a community for number string design

The Journey is Everything: Writing & Teaching to Discover, to Essay, to Live Wide Awake

Crawling Out of the Classroom

In everything that my students and I do together, we strive to find ways to use reading and writing to make the world outside of our classroom a better place for all of us to be

Exploring the intersection between teaching about talking and talking about teaching

Reading to the Core

thoughts on education by Grant Wiggins

Be Strong. Be Courageous. Be You.
There's a Book for That

Reflections on the Teche

Reflections and poems about life on the bayou

A Blog about Learning, Teaching, Writing, and Reading

I am a reader, a teacher, a writer, a thinker, a reviewer, and a dreamer of dreams.

A blog about learning

Of Fourth and Excellence

Learn Something New Daily, Teach What You Love

This WordPress.com site is the bee's knees

the good. the bad. the planning.

A meeting place for a world of reflective writers.

Thoughts on Teaching, Learning, and Leading

A blog about running, reading, and teaching!

A group blog about using genius hour in our classrooms

Catching Readers Before They Fall

A community of readers

Thoughts on Literacy & Leadership in Education

To Make a Prairie

A blog about reading, writing, teaching and the joys of a literate life

"When you know better, you do better" Maya Angelou